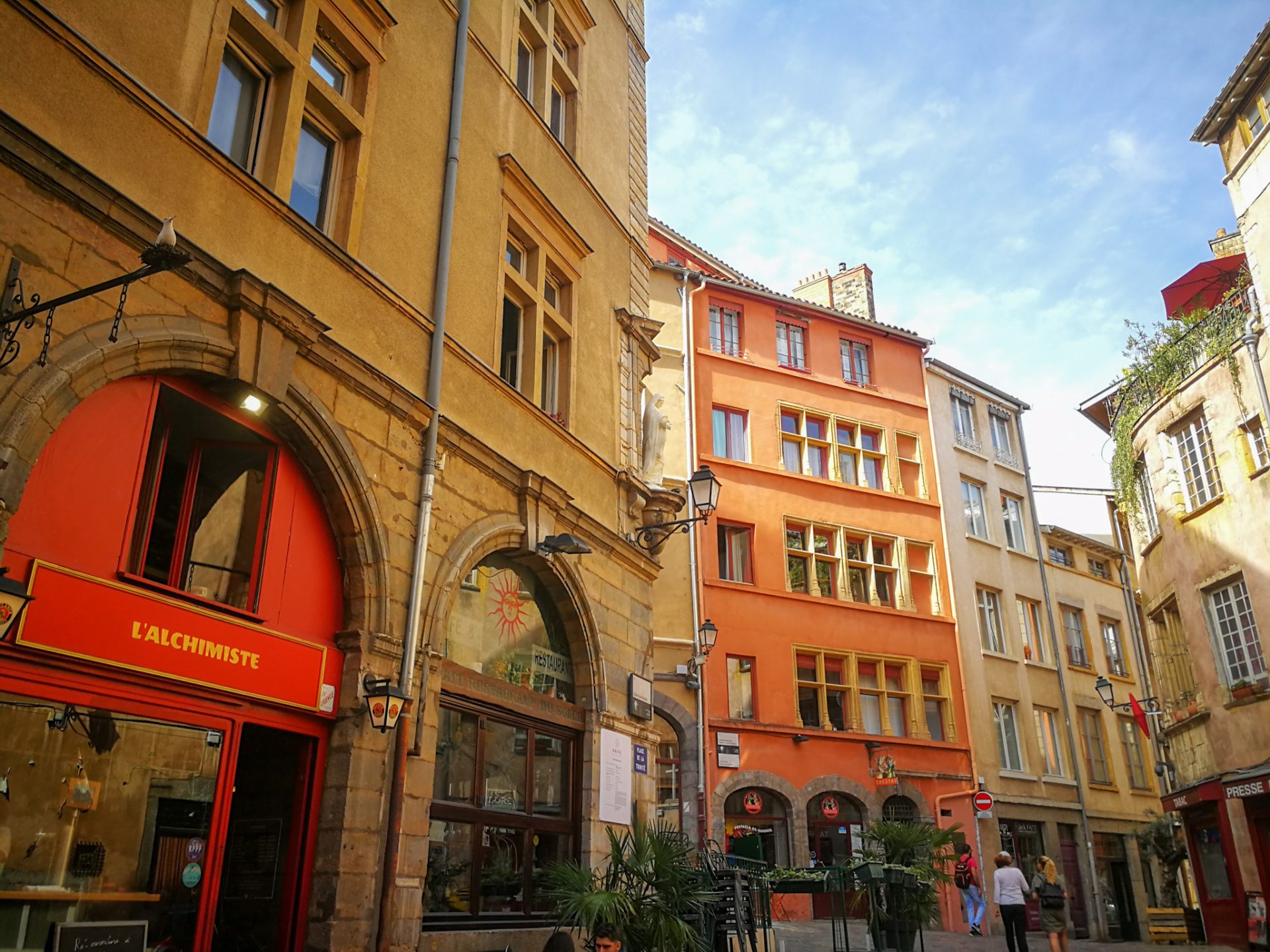 Why Lyon is different from other cities

Today, cities across the world are competing for the top-ranking positions for restaurants, beaches and monuments, or the most intense and hot nightlife! We only want the best of the best, and not the rest!

It seems difficult to make yourself hear in such a hustle and bustle of choices and cravings. However there is a city, located in a real crossroad of Western Europe, which always has, still does and forever will know how to stand out from the crowd, being itself and nothing more…

Let me tell you about this strange demoiselle riding on two waterways and who has always defended and affirmed her exceptional temper.

This strange demoiselle is of course the city of Lyon. We often hear of Lyon as the Capital of the Gauls and the city of the festival of lights, and yes indeed it has long been the civilization and trade epicenter of the great Lyonnaise celtic province during the Roman Empire, and it offers the magic of lighting up on December 8th.

That’s a lot of titles, you will tell me! And you are right, but still…it seems to me unfair to grant it only these, since the city has largely proven across its history that it deserves way more.

So, let’s visit Lyon! But what for? Well, I will tell you why one should by no means leave aside this curious and inspiring adventure.

Oh yeah, just one little details to take into account…I myself grew up in the Lyonnais region, and I have spent a big part of my life in Lyon. Fair enough, so there’s absolutely nothing objective in this article (I can see you coming, he!). Indeed yes, there is nothing objective at all regarding my vision of the city, and that’s for the better!

The goal here is not to recount everything already written thousands of time in the many Lonelyplanet or Michelin travels books (to name just a few…), but to transmit my profound love for this unique place.

First of all, let’s start by geography. Lyon is one of the rare cities in the world (with Pittsburg in the U.S.A and others) to have two rivers converging in its center, with two hills facing each other in an eternal mirror reflecting the lost values and the open wounds caused by history.

The locals particularly enjoy the fact of strolling by the riverbanks of the Rhône river, with friends or family, taking a small apéro on the many barges and lawns. During the warm and nice seasons, musicians play along, and that’s when the Lyonnais dolce vita takes all its powerful meaning.

The hills of Fourvière and Croix-Rousse offer views and perspectives which the inhabitants never get tired of admiring and bragging about. The Lyonnais who are in love with the local history, like myself, can’t help looking up to remember the sometimes happy, sometimes tragical events which these hills have witnessed in the old days.

When it comes to parks, they still draw more and more locals and others in search of bike rides or farniente, spending afternoons playing mölkky or pedaling with rosalies. And in certains parks, we meet friends around giant barbecues!

Lyon is also a city that communicates closely with the surroundings territories. When staying in Lyon, one easily gets used to the easiness to escape to the Beaujolais countryside to find some little charming villages with the warm colors of the pierre dorée, or also to numerous mountain ranges that the Alps offer endlessly. Being in Lyon is to be able to get away for a day to go kayaking or canoeing on various waterways, or indulge in a good bike ride along the Rhône river with the Via Rhôna cycling route.

The city has always built itself in deep connection with its surrounding terroirs, never ignoring the role that they all played in shaping its very identity.

The locals are well aware of  that, and they never miss the opportunity to evoque their terroir in humble but still passionate and praising terms.

This naturally brings me to talk about l’art de la gueule (the art of eating) , so specific to our beautiful city on the Rhône. Curnonsky claimed in 1934 that Lyon was the French capital of gastronomy. Do we really need, once again, to give ourselves titles to praise our values? I think not, and instead of talking about the capital of gastronomy, I prefer to tell you about a sanctuary of good food.

We wouldn’t swap anything in the world for our bouchon specialties, based on pork meat (quite fat, let’s face it!) which our best chefs seek to improve every day. Lyonnais cuisine? No, not only, because once again this is the regional terroir which tends to sublime the art de la gueule here. However, Lyon is also about more incredible colorful cuisines than ever before. From eastern Mediterranean food to African, Asian and even now Latin American delicacies, the choice is big. Besides, please note that in Lyon we particularly pay tribute to Japanese cuisine which we mix with our best traditional dishes. How to resist this?

This is also this creativity that makes our mouth water, these new chefs with their toque blanche and their craziest ideas and hard work to invite the locals and others to attend spaces for always more and more diverse new encounters. Quality is always there, with a service typically à la lyonnaise! Courteous, full of humour and life.

Another essential aspect to understand well the local atmosphere is the architecture. Lyon is not a city with opulent buildings, apart from the magnificent Basilica of Fourvière or the Opera, the Hotel de Ville and the Hotel-Dieu on the Peninsula.

Indeed, the city doesn’t need monumental buildings to bring the visitor to wander around its various districts. The intimacy of Lyon’s streets gives the impression of well-being and familiarity, making you want to hang around and discover the many traboules hidden here and there.

It is also an almost mystical atmosphere, even spooky one which leaves us to think that every corner keeps many secrets still silenced, as night draws on…Let yourself be taken on an off-the-beaten-track night tour, through the dimly lit narrow alleys to soak in the warm colors of the Renaissance buildings. You will have the strange sensation of being spied on by one of the mysterious characters who once haunted those streets. Between magi and psychopaths, there is a lot to deal with, trust me!

Last but not least, we can’t not talk about the inhabitants.

Who are those Lyonnais, these famous gones* and fenottes* who are renowned for being cold and withdrawn?

Indeed, the specific geography of the city explains why the locals have inherited the best and the worst of the four cultures which have given birth to them: the Germanic and Celtic worlds, and the Latin and Mediterranean worlds. Sometimes prone to farniente and a strong taste for absolute aesthetics, sometimes of an austere temper but serious and relevant in the way they exchange with others, the Lyonnais do not resemble anyone else than themselves. Here, we greet foreigners and locals the same way, and there is no façade to it.

However, what makes Lyon so rich socially speaking, it is that it manages to keep its original character while peppering it with different cultural hues which compose its formidable immigrant and foreign communities. This city has always been open to the outside world, by trading necessity first, then by wishing to get closer to positive foreign influences rather than the stifling paternalism of the French capital, Paris.

Lyon is unique for it refuses to let anyone dictate how it should be, inventing its own codes, shaking up the trends and despising standardization.

The city is not being invaded by a so-called “mass tourism”, and we easily understand why when we notice that it doesn’t cover up in a Disneyland illusion. On the contrary, it takes a sly pleasure in always showcasing its most beautiful silky outfits, those which it has been weaving across the centuries.

It is easy to have the feeling that, as you leave this city even after taking several guided tours and several strolls, this latter refuses to reveal itself to the travellers…indeed, it only wishes one thing: that you make the promise to dedicate time to us during a second rendez-vous.

You surely have understood, Lyon is a tough, stubborn, mischievous city…but fascinating and caring one at the same time. So, why not coming to tame the beast by contacting me here?